Hi StyleCeleb Fans, Just received a press release from trusted New York publicist Sydney Reising: VERSACE Rips off KESH x AMERICAN APPAREL. “It is unfortunate that we must announce that Los Angeles based visual artist KESH has fallen victim to plagiarism from fashion house Versace and plans to legally pursue the issue. Yesterday the artist discovered that the label has illegally duplicated her original artwork and is retailing a shirt for $650 at Selfridges.”

The Two t-shirts side by side, they look very similar, KESH and the recent Versace version
New York publicist Sydney Reising’s Press release goes on to state:

“Back in 2013, L.A.-based artistKesh debuted a capsule collection of graphic black-and-white clothing and accessories for American Apparel featuring a series of self-portraits by the artist printed on a selection of American Apparel’s classic styles.  The collection was extremely well received and sold out almost instantly as a result of the support ranging from models such as CaraDelevingne and Jourdan Dunn (both were frequently seen in multiple pieces from the collaboration), to musicians like Jessie J and Wiz Khalifa, and K-POP stars2NE1 and G-Dragon…. it seemed everyone, everywhere, wasInstagramming Kesh’s signature self-portrait print for the global retailer. The capsule was sold in American Apparel flagship stores around the world, from Tokyo to Berlin to New York. The artist traveled the globe to celebrate in stores worldwide with fans as the collection debuted.

Today, Kesh posted a photo on her Instagram featuring her $50 T-shirt, next to Versace’s new, nearly identical Medusa cotton-jersey T-shirt, which retails for $650 via the e-commerce website belonging to Selfridges in the UK.Versace has not been responsive to inquiries made by the artist thus far, but here’s what KESH said to New York Magazine’s The Cut earlier today: “I have always had a deep admiration for Versace. It’s an iconic brand that has stood the test of time. I am deeply disappointed in this. This is not only artwork from a show that took me two years to develop and create. It is not only artwork from a collection that I created for American Apparel to provide something affordable and accessible to supporters of my work. But this is also my face! I can’t understand how something like this could happen.”
The artist’s discovery of the Versace duplication of her artwork is related to the “KESH X American Apparel’s Face Le New” Big Tee, an oversized tee with an open neck in a print by KESH produced as part of the artist’s 2013 capsule collection with American Apparel. The image is included below, the shirt is also seen on Delevingne and Dunn in images found below.
Please also find, for comparison, the Versace “Medusa” tee which is strikingly similar to the KESH X American Apparel “Face Le New” tee as well as a shirt by fashion design house VERSACE via the e-commerce website belonging to Selfridges in the UK. Most alarming, to us anyways, might be the caption via Selfridges which reads “Versace’s flair for contemporary prints can be seen with this statement t-shirt. Crafted from cotton-jersey and featuring Medusa’s head printed on the front, simply team with jeans for a luxe off-duty look.” 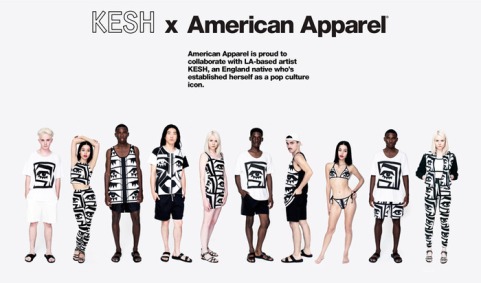