The American Music Awards brought out the experimental fashion crowd. Styleceleb was there as Lady Gaga arrived on a puppet white horse wearing Versace almost looking like Mariah Carey? Hands down, Lady Gaga owned the red carpet with her white steed. Wow, that was an entrance.

Katy Perry glided down the carpet in a goth like fairy princess gown, Miley Cyrus kept her tongue in and strutted a white suit with Wayne Newton and Billy Ray Cyrus. Kesha with her multi colored hair, black dress ala Angelia Jolie and tipsy walk on the carpet (her assistant had to help her through the entire press line). Taylor Swift doing her best impression of Barbarella and Christina Aguilera in a white cut out dress and very thin toned body stole the show.

Photos can be seen at http://www.GraylockPhoto.com

Miley Cyrus sure knows how to catch peoples attention! This year Ms. Cyrus decided to dress up as  Rapper Lil Kim at The 1999 MTV Awards. This is was one of the most conversational pieces the Rapper wore. Lil Kim responded to Miley’s look via twitter. 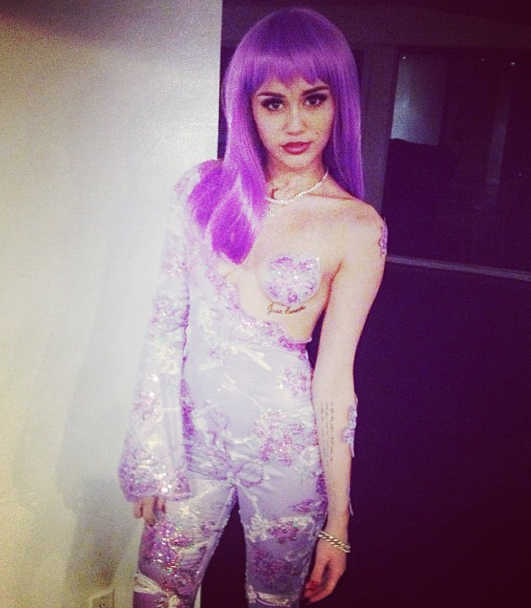 Top Halloween costumes as mentioned in the NY Post may lead to getting lucky???

“Miley Cyrus costume” was the second most popular Google search, and also the fifth most-searched costume on Google Shopping. Vendors like HalloweenCostumes.com are selling teddy bear leotards like the one the “Wrecking Ball” singer wore during her controversial and attention-grabbing VMAs performance in August. But ladies should take note — a small survey released in September found that single men ages 27-39 think they have the best chance of going home with a woman dressed as Miley.

StyleCeleb thinks they must be talking about doggie Halloween costumes…